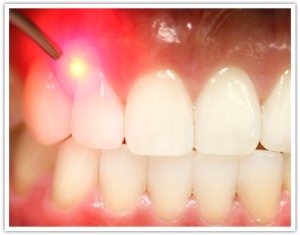 It sounds like part of a cheesy science fiction movie. Who would want Dr. Evil’s henchmen running around inside of their mouth with a “Frickin Laser”?

Luckily, we aren’t talking about evil henchmen; this is about the friendly technician at your Seattle dentist office. You don’t have to worry about them trying to take over the world using a laser in your mouth, but any dangerous bacteria lurking in your gums will need to be on the lookout!

Laser Bacterial Reduction (LBR) is one of the latest weapons in our arsenal to combat periodontal disease. LBR is not a substitute for the techniques and procedures we have used in the past, but it can be a very effective supplement to those treatments. It is certainly not a replacement for regular brushing and flossing, but it can make all of these more effective.

During a normal periodontal cleaning, the technician will remove the bacteria containing plaque and tartar. No matter how gentle the hygienist is, this normally leads to some minor bleeding of the gums. This bleeding is an entry point for the bacteria that has been loosened by the cleaning process.

Because the LBR treatment kills the majority of the bacteria, your cleaning is much safer than before. Unfortunately the bacteria cannot be permanently destroyed, and will begin to grow back within a few weeks. With regular brushing and flossing the level of the harmful bacteria can be controlled.

Is there a down-side to Laser Bacterial Reduction? The biggest that we have seen is that most insurance programs don’t cover LBR. We feel that LBR is such an effective preventive measure that the dental insurance industry will soon catch on, and make a regular part of their coverage, just like semi-annual cleanings. In the mean time we recommend that our patients take advantage of this effective, inexpensive, and painless treatment. LBR is non-invasive, and only takes five to ten minutes to complete.

Laser Bacterial Reduction may not keep Dr. Evil from taking over the world, but it will keep him out of your mouth!